by Wuhan Corona
in Symptoms
0 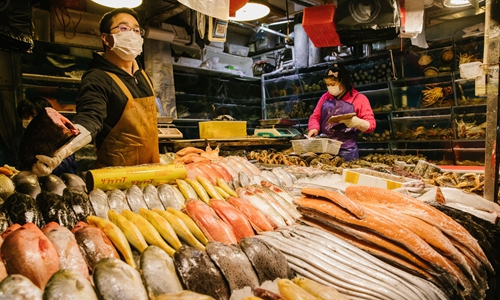 China’s top epidemiologist said the recent COVID-19 outbreaks in Wuhan, Beijing and Dalian share certain similarities and did not come about by coincidence, as they all took place in the cold contaminated environment of seafood markets, and the virus may have infected people through aerosols.

In an interview with Chinese media on Wednesday, Wu Zunyou, the chief epidemiologist of the Chinese Center for Disease Control and Prevention, said their humid and low-temperature environment is more conducive for the novel coronavirus to survive.

As long as there is contamination, the virus can become concentrated and will not be easy to inactivate, resulting in the virus spreading, Wu said.

Wu revealed that an experiment carried out in Beijing’s Xinfadi market, in which a fluorescent powder was used to simulate the virus, showed that if the environment was contaminated, the virus could infect people through aerosols. Workers would then pollute the environment after becoming infected, forming a mixed transmission mode.

To prevent the presence of novel coronavirus in humid environments, Wu suggested that places with environments similar to those in seafood markets should get adequate ventilation, which will help lower the risk of infection.

According to the National Health Commission on Thursday, Dalian reported five domestic confirmed patients, four of whom were asymptomatic. At the same time, Beijing also reported one confirmed case relating to Dalian.

The local government said Wednesday that most confirmed patients are employees from the Dalian Kaiyang Seafood Company or their close contacts.

According to Wu, Dalian has basically prevented the COVID-19 outbreak from spreading, and believes there will not be a larger scale epidemic in the city.

Many patients were found before they even showed any symptoms, and as the current new confirmed cases were asymptomatic, they do not pose a risk to society, Wu said.

Can plaintiffs from other countries hold China legally accountable for the coronavirus pandemic in their respective courts?

Can plaintiffs from other countries hold China legally accountable for the coronavirus pandemic in their respective courts?

Tone down coronavirus alarmism and other commentary